The T'au continue! I love getting into the flow with a project, such that you just can't stop! This week is a Piranha with two Gun Drones. It wasn't properly attached to the flight stand, and I wanted to put it in a low-height box with the other models, so I magnetised it to the flight stand. This means it can spin around on the flight stand, which is very pleasant! 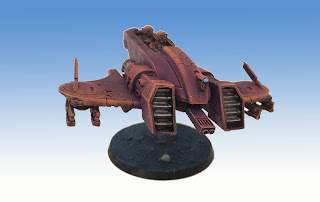 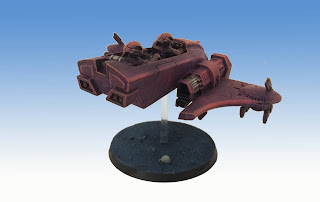 The Fire Warriors of the Dried Brush

This is my second team of Fire Warriors. The first has pulse rifles, and these have pulse carbines. That's how my friend built them, so I decided to make a team of one type and a team of the other. Same techniques, but a slightly larger team this time. There will be two further models, but I plan to modify them: they currently have bare heads but I want to put helmets on them and I'm waiting for the helmets to arrive. Another nice team to add to my growing T'au force! 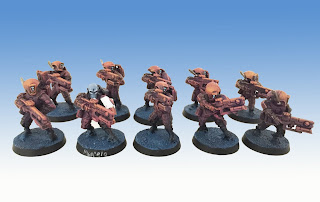 Once upon a time, a friend of mine gave me a box of models that had been languishing in his loft. There were various Space Marine models, most of which you have seen already, and some T'au. I planned to fix up and paint or repaint the T'au at some point, but wasn't sure what colour scheme to use. I knew I didn't want to use the standard T'au ochre, and I certainly wasn't going to paint them completely white, like the GW website models. I eventually came across a scheme used by @Pegastyx on Instagram, that suddenly struck me as being a unique way of approaching T'au. Rather than make them neat and tidy and clean, she had painted them in a drybrushed scheme with a sort of 'sunset' palette of colours. I immediately knew it was the colour scheme for me, so I created my own version of it. The base is purple, and then there are drybrushed layers of pink (pink horror) and deep yellow (averland sunset).

These Fire Warriors with pulse rifles were first, and this is how they came out. I love them so much! The blue bases in particular were a serious departure for me, but they complement the models so well. Onto more T'au, then... 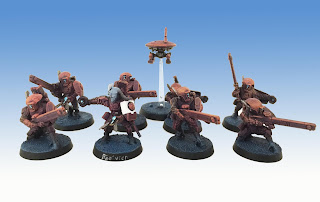 I picked this model up second hand, separately from Indomitus. Despite my love for Necrons, the Indomitus box wasn't tempting as it had far more models than I would want to add to my Necron force. So I picked up the one model that interested me, which is the Royal Warden.

I don't play 9th, so don't have the opportunity to actually field him as a Royal Warden. Therefore I decided, since he looks like a tall Immortal, to run him as an Immortal. Perhaps he has been gifted with a larger, stronger body due to his prowess in battle! I cut off the little dangly things from his arm, to help him blend in better with the Immortals and create a cleaner, sleeker look. I'm not a fan of too many dangly bits on models, since they tend to break off at some point in the model's life. This wasn't too dangly, but I think the model looks better without it.

So here he is, alongside his Immortal friends: 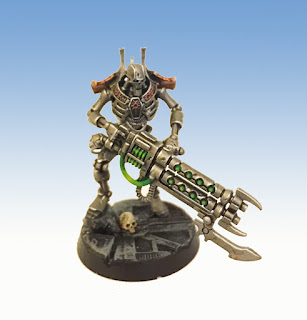 Five more Chosen... to stalk the worlds of the Imperium, sowing death and despair...

My Black Legion has expanded once again, with five more Chosen! This is quite a diverse squad in terms of origins: one comes from Dark Vengeance, two from Shadowspear, one from Blackstone Fortress, and one is a mixture of current and old Chaos Space Marine kits (as far as torsos and legs go: the weapons and heads could be from anywhere! haha).

Not much to say, except that I'm proud I painted a cloak in a colour other than red! 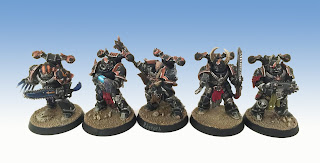 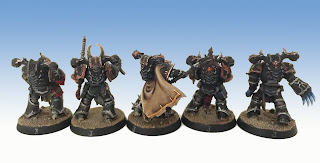 A while back I bought four second hand drop pods. They were a bargain, which was just as well, because I really didn't need four drop pods - two would have done. Consequently, this one has lurked on my shelf for a while without a home. It now has a home... except it doesn't. You see, I couldn't decide what faction to paint it as, so I painted it as no faction. It's a generic space marine drop pod that can be used by anyone. This means it will actually see some tabletop use if I randomly decide to include a drop pod in an army on game day! Hooray! Everyone wins!

I decided to make it look really damaged, so it looks as if whatever iconography that was on it is now lurking under years of grime. Martin, whose work you've seen here before, said I painted impressively fast, and this motivated me to see how fast I could paint the drop pod. Once it was sprayed black, the rest took me about 4-5 hours of work, with a bit of work on some other models at the same time (such as when the washes were drying). Not bad, I reckon! I even had a stab at hazard stripes! Enjoy the pictures. 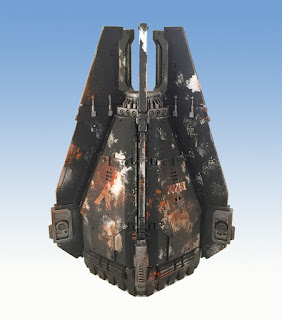 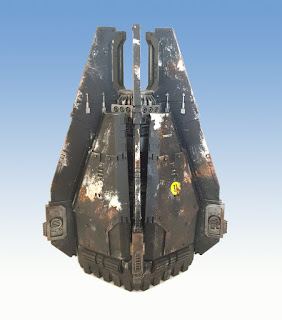 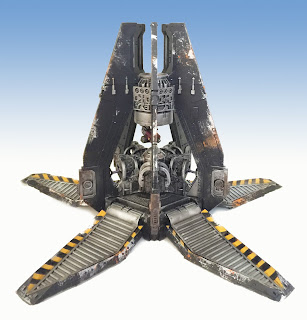 I'm pleased to say I have managed to finish a few more Minotaurs! This is a command squad, led by Sergeant Argaeus. Each model is an intricate conversion, including adding a little plasticard to most of them, below the torso, to make them a little taller.

I tried to go for interesting and poses to create an squad with some dynamism, and I focused on making them look good rather than equipping them with effective wargear.

The banner is sculpted from green stuff, and the image was printed onto white waterslide transfer paper, so no, I didn't paint it! Creating banners this way is something I will pursue further, since I'm not skilled enough to paint tiny images onto them.

The most satisfying model is Argaeus, as the arms required a lot of cutting to get them into this pose! I think I upped my game a little with the blade of the power weapon, too.

I'm so pleased with the squad that I decided to take the ideas forward and work on some Honour Guard, so I've been sorting out some parts to make that happen. I'm also building a Vanguard Veteran squad, although I'm sweating over those a bit because they're not quite looking how I imagined. Some of them might get dismantled and rebuilt... 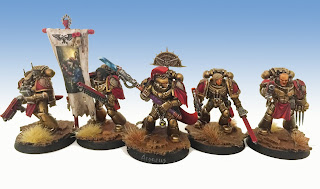 Here are some individual shots: 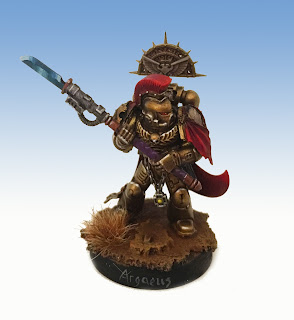 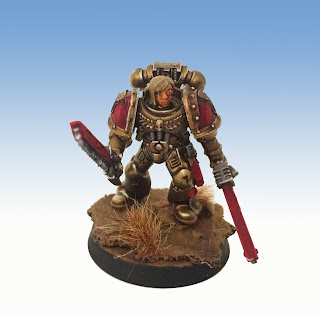 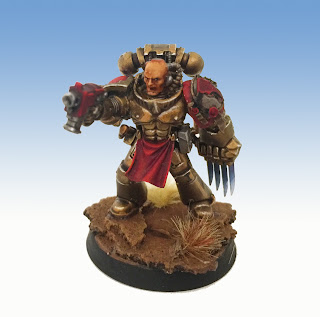 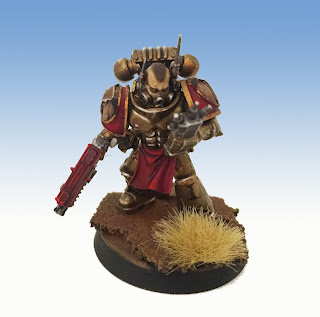 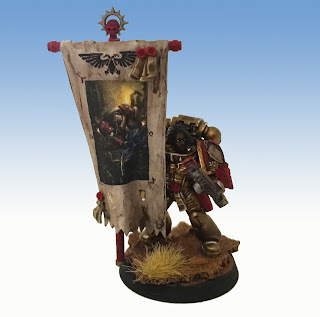 The T'au continue! I love getting into the flow with a project, such that you just can't stop! This week is a Piranha with two Gun D...